This year’s March Madness is bound to bring more sadness than madness.

The 2013 college basketball season began like any other, ranked teams seemed to be dominated while making us all believe that bracketologists know what they are talking about.  Hell no.  Do they ever know what they are talking about?  LA Sports columnist Bill Plaschke isn’t a bracketologist and his brackets have finished in 90% accuracy the past two years on ESPN’s Around the Horn….which just goes to show you….if you follow sports and are a die hard passionate freak show for sports….then you got a shot to win your March Madness office pool.

Every March Madness is bound to bring heart-wrenching upsets, hail mary three pointers and your rare, but expected, shutouts.  In reality, you want all these things to happen, just in your bracket favor.  This season has had more than 15 upsets among top ten teams, giving every ranked team at least two losses.  As of now the #2 ranked team, Indiana, has lost four times.  FOUR.  The #10 team, Michigan St., has lost 7 times. Count ’em, SEVEN.  Yea, this is going to be a fun tournament.

Is it too much to ask to have a predictable March Madness?  Yes, yes it is…..because then there wouldn’t be any madness.  My only issue is that this year’s NCAA tournament is going to bring more jeers than cheers.  The only madness I am getting is the madness of making my bracket?!  I honestly don’t know who to choose let alone make an argument as to why I am choosing Ohio State over Valparaiso.  The one conference I always turn to, the eminent Big East Conference, has sadly fallen from grace.  Can we say…. overrated?  If I was you, I wouldn’t bet on any Big East Team getting very far in the tournament let alone winning it all.  So my advice, would be to bet on the randoms…..the more random the better, just shake up your bracket.   This March Madness is the Year of the Underdog.

Who is seriously going to win it all?  Nobody on ESPN can predict that. You can count on that  lucky Smoe to win it all, predicting Virginia Commonwealth to win as he/she proceeds to collect their accolades, congratulations and that big pot of mula.  I think we can all safely say that this bracket winner is more or less going to have no college basketball knowledge or real interest in the sport.  What a cheap trick you are March Madness! 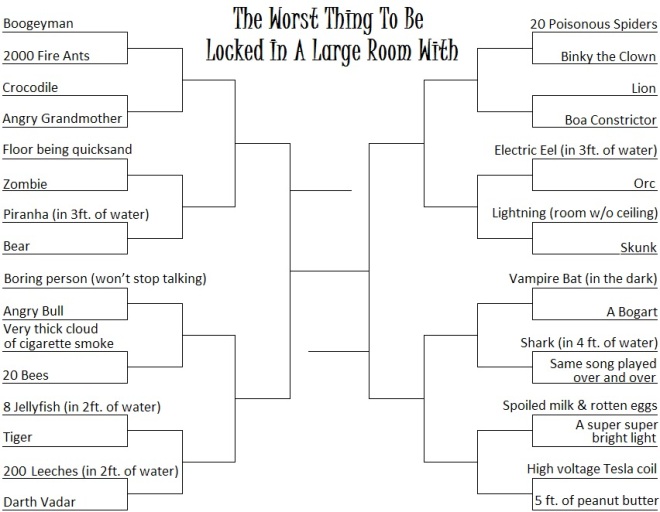